WVWA Joins Forces with Others to Protect the Chimney Swift Habitat

WVWA Joins Forces with Others to Protect the Chimney Swift Habitat 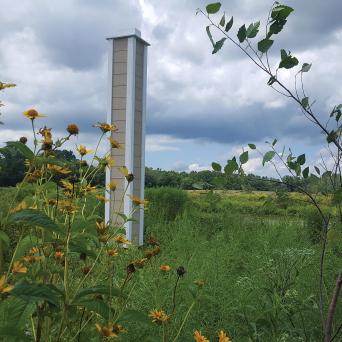 Since 2016, the Wissahickon Valley Watershed Association (WVWA) has been working to create and protect habitat for chimney swifts, a bird species in severe decline. We’ve created habitat in the form of artificial chimneys or “towers,” the first built at our Crossways Preserve in 2017. Three more were built last year at our Dodsworth Run Preserve, the Wissahickon Waterfowl Preserve, and at Fort Washington State Park.

Researchers can’t pinpoint the root cause of population decline in aerial insectivores (birds that feed by capturing insects in mid-air). It may be due to habitat loss where they breed, migrate, and winter, or it may have more to do with changes in insect populations. This year, we had the opportunity to join forces with local and distant conservation partners to study chimney swift populations and try to get some answers.

In late 2018, the state Department of Conservation and Natural Resources Wild Resource Conservation Program put out a request for projects that would investigate the causes of population decline in aerial insectivores, which since the 1950s have been declining more rapidly than any other bird species. WVWA and Powdermill Avian Research Center (based in Rector, PA, an hour southeast of Pittsburgh) received funding through the WRCP grant to study chimney swifts because they’re an ideal representative of aerial insectivores — sort of a “canary in a coal mine.” Gaining a better understanding of what factors are contributing to their decline will help shine a light on why other species, like common nighthawks and purple martins, are also decreasing in number.

There are several aspects to the grant. First, we’re trying to figure out more about chimney swift diets. To that end, we put sticky traps at the top of occupied nesting towers (applied in a way that did not pose a risk to native wildlife) at Rushton Woods Preserve, where our partners at the Willistown Conservation Trust informed us they had three towers with active nests. This will give us an estimate of the relative abundance of flying insects in an area and what species are present.

In addition, fecal or guano samples were collected from the same towers over the nesting season. The samples will go through DNA analysis this fall to see what kinds of bugs the birds were actually eating, compared to what was caught in the sticky traps. From that, we will learn if there is a difference between the actual diet and available food. Quantifying this will help us learn if chimney swift declines are tied to having less food available overall, or with having only low-quality food available.

Past research suggested that swift diets shifted in response to surrounding pesticide use – they went from eating more nutritionally rich beetles or hard-bodied insects to less nutritional true bugs or soft-bodied insects as the rate of DDT application increased around them.

The last aspect of the grant is to compile pesticide use data from the U.S. Geological Survey and the Department of Agriculture and overlay it with the areas sampled to see if, and how, pesticide application might affect their diet. We’ll also be able to learn more about the effectiveness of artificial towers in attracting chimney swifts, and what might make some sites more preferable to others. We can then better replicate those conditions to create a more suitable habitat.

As part of our work with Wyncote Audubon, our local Audubon chapter, we’re also striving to develop a registry of known nesting and roosting sites — the places that swifts depend on right now for habitat — so that they can be protected and we can further our understanding of why some sites are more desirable.

If you’ve witnessed the spectacle of hundreds (or thousands) of swifts swirling in the sky at dusk and entering a chimney, one by one, to roost for the night, you know it’s something special. These birds are worth saving, and you can help us by recording those sightings and letting us know about the places in your neighborhood used by chimney swifts. For more information, contact me at margaret@wvwa.org.