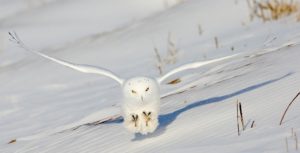 Congress has passed a tax package that includes a provision to open the Arctic National Wildlife Refuge to oil and gas drilling.

As dispiriting as this, you should know that our fight isn’t yet over. A number of regulatory, scientific, political, and infrastructure-related hurdles must still be cleared before lease plots can be made available for sale. This whole process will likely take years and we will persist every step of the way.

Although the fix was in on this round, we upheld Audubon’s six-decade-long commitment to the Arctic Refuge. We broke through the media clutter at a time when news cycles are shorter than the attention span of a two-year-old:

We are not sanguine about this outcome. But it has only focused us on what we need to do to prevent its implementation. More than 200 species of birds, including the Long-tailed Duck, Tundra Swan, Snowy Owl, and Northern Pintail all depend on the Arctic Refuge. Because just like these birds, who are remarkably resilient and driven in their migrations, we will persevere in the face of a changing environmental landscape.

For 119 years, generations of Audubon volunteer leaders have been called to confront feather-hunters, DDT and climate change. This new fight is ours and, with your support and help, we’ll prevail.

Thank you for your ongoing commitment to protecting birds and the important places they depend on.