Happy New Year!! Hope this report finds all of you doing well in 2009! I’m writing this report during a January cold snap and thinking about spring all ready!

The first raptor of the season was a Northern Harrier during the first hour on September 1, with a few Broadwing Hawks as single birds or in twos for a total of 9 out of 20 birds sighted that first day. The sky was blue and cloudless and the temperatures were warm for the first week – until the remnants of Hurricane Hanna paid us a visit on September 6.

After Hanna cleared the sky was blue again and the temperature was cooler. Three Bald Eagles were counted on September 7, with three more on September 8. The later hours before dusk saw approximately 800+ Common Nighthawks travel through the valley and along the ridge towards Flourtown and Wyndmoor.

September 13 was quite warm with a heat index of 100 degrees Fahrenheit – but it was also the beginning of Broadwing numbers with 45 total and 42 between 2:30p – 3:00p. The bulk of the Broadwings sighted would pass through between September 15-18 with 8,337 birds recorded.

The highlight was on September 18 when 4,848 Broadwings were recorded as well as the 200,000 raptor counted at MHHW during the 4:00PM hour!!! There were 23 Osprey recorded that day as well.

The non-raptor highlight of September was on the twentieth, and it was quite a surprise to all present. A Magnificent Frigatebird was a flyover at 12:58PM!!! The bird was overhead for 6 minutes as it circled over the parking lot entrance and gave us great looks (I believe it was trying to figure out what we were doing as well!). The frigatebird then headed ESE towards NJ and was likely the same individual reported at Blue Marsh Lake near Reading, PA earlier that day. This was a life bird for a few folks on hand and a state bird for everyone else!

October highlights included 6 American Pipits on October 4, 18 American Kestrels and 67 Sharpies on October 5, and October 11th recorded the first Golden Eagle (and one of two with the other sited on October 30).

Another fine day was October 12. This day is always a highlight as Tom the Master Falconer and his nephew brought three raptors for viewing. It was quite warm, so the birds needed to be in the shade of the deck. Approximately 80 people were on hand for great looks at a white-phase Gyrfalcon, and adult Red-tailed Hawk and a Finnish Northern Goshawk (with really cool eyes!).

October 17 was a monumental day for 2008 as the 10,000th raptor of the season was recorded at 4:50PM. A Red-shouldered hawk accompanied by a northern harrier and a sharpie passed overhead and was also the 202,124th bird recorded since the Hawk Watch started.

Finishing out the month – October 17 and the following days saw Turkey Vulture movement (always difficult to discern from the local population) in pretty good numbers: 118 on the 17th, for a total count of 391 by October 31.

The picnic was held on Saturday, November 1 to close out the season and approximately 60+ were on hand for a fine selection of eats – and a great dessert selection!!

In closing, I’d like to thank Mary Lea, whose support was much appreciated during her first season on the “sidelines” as coordinator of the MHHW. Glad there were three of us who replaced her!

Thank you to all who participated, on behalf of Andy, Jamie and myself, in continuing this great tradition established more than 20 years ago. I already look forward to seeing everyone again in 2009! 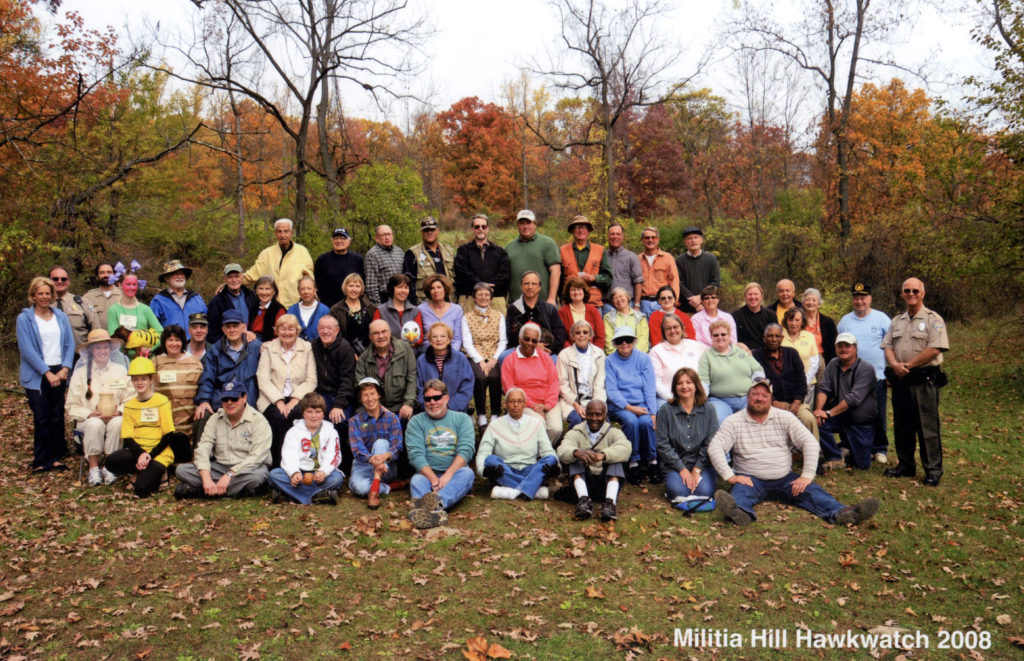