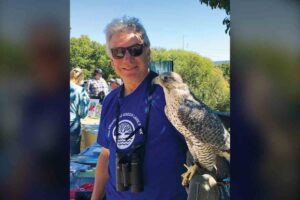 Leigh Altadonna has been fascinated by birds since he was a kid.

“Think about how fantastic these small creatures are, traveling many thousands of miles each fall and spring, between North American and South America. It’s just incredible,” he said. “It’s a marvel.”

Altadonna, 72, is president of the Wyncote Audubon Society. He joined the club as a teenager back in the 1960s, when it was called Wyncote Bird Club. In the intervening decades, he’s held lots of other titles in the birding community, including serving for 12 years on the National Audubon Society board of directors. He also enjoyed a 44-year career as an educator, retiring as an assistant superintendent of Abington School District in 2014.

He can trace his love of birds to the early 1950s, when his family moved from the Olney section of Philadelphia to suburban Montgomery County. Their move roughly followed the path of the Route 6 trolley that Altadonna’s father drove for SEPTA.

“There were a lot of open spaces out here,” he said. “Glenside wasn’t as developed as it has become. I really got engaged with the woods and seeing birds.”

The principal at Glenside-Weldon School, T. Russell Frank, was vice president of Wyncote Bird Club, and he encouraged teachers to incorporate nature into their curriculums. Altadonna began visiting nearby Briarbush Nature Center, whose sole resident was a Quaker woman in her 80s named Florence Griscom, a knowledgeable birder who had owned the land with her late husband.

“My sister and I would walk to her home. She lived in a log cabin,” Altadonna said. “We were able to spend the last few years that she lived visiting her. She would teach us about the birds coming to her bird feeders.”

Mrs. Griscom did the same for Scout groups and anyone else who showed an interest.

“It didn’t matter where you came from,” Altadonna said. “She was all about teaching people about birds, and to protect them.”

Both Altadonna and Frank helped to preserve and develop Briarbush over the years. The cabin became the Griscom Bird Observatory.

At Temple University, Altadonna was leaning toward teaching high school biology, until a visit to an elementary school changed his mind.

“It was an exciting place. I said, ‘This is the kind of environment I’d like to teach in. I could keep my interest in birds and science,’” he said.

He became an elementary teacher in the Abington School District to teach several grade levels including first grade. It was rare then for a man to teach at the elementary level — so much so that the Philadelphia Inquirer interviewed him as part of a story about it.

It was exhausting to preside over a room full of 25 or 30 first-graders, Altadonna said, but also wonderful.
“It was always so rewarding to see kids pick it up — get the key and unlock the words, and really be able to read,” he said. “It was nice to be a part of that.”

He earned his Doctor of Education degree from Columbia University, then returned to Abington where he transitioned to administrative roles, including principal, curriculum director and ultimately assistant superintendent. When he retired in 2014, school officials described him as “awesome,” “kind, genuine and thoughtful,” and a
“beautiful soul.”

Altadonna lives in Wyncote with his wife, Carol, also a former teacher. They have three grown daughters. In his free time, he advocates for things that benefit birds and pollinators, like landscaping with native plants.

He was part of the team behind Lights Out Philadelphia, a new initiative in which many iconic Philadelphia skyscrapers — Comcast towers, the BNY Mellon Building and Liberty Place — will voluntarily go dark at night during peak migration months. The lights can cause migrating birds to become disoriented, confused and exhausted.
“I subscribe to the notion the Audubon society uses: ‘Where birds thrive, people prosper,’” he said.

The pandemic postponed Wyncote Audubon’s 2020 trip to Colombia, but he’s hoping it’s rescheduled soon. He hopes to glimpse some taningers there, or even a cock-of-the-rock, with its bright orange and red plumage.
His favorite birding trip wasn’t an exotic locale like Panama or Costa Rica, but Hawk Mountain with his parents.

“It was memorable because it’s Hawk Mountain, you see the migrating hawks and visiting a famous site. But it was important because of their acknowledgement of my interest,” he said. “Here’s my Italian father, who was athletically inclined, could not figure out ‘How do I have a son interested in birds? Why isn’t he playing baseball?’
“But they invested in my interest. They allowed me to put up bird feeders in the yard. And I got them into it, a little bit.”

While birders often talk about “spark birds” that ignited their hobby, Altadonna said it never really worked that way for him. He enjoys the song of the wood thrush and is awed by the migration of the warbler, which can be greater than 12,000 miles, but he’s never had a favorite.

“I’m sitting now in my office, looking out at a beautiful cardinal,” he said. “There’s lots of different birds I just like. I remember sitting in the cabin with my sister and Mrs. Griscom, looking at the birds that came through. I enjoyed seeing them all.”