Building Collisions Are a Greater Danger for Some Birds Than Others

Building Collisions Are a Greater Danger for Some Birds Than Others 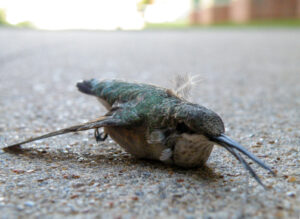 Every year, as many as 1 billion birds die from colliding with buildings, especially those with extensive glass surfaces. During the day, these collisions result from birds mistaking reflections of open skies or nearby vegetation for the real deal. At night, when most birds migrate, lit-up buildings disorient and attract them, luring them not just off their migratory paths, but straight into collisions. These fatalities account for 2 to 9 percent of all birds in North America in any given year, making building strikes second only to feral and free-roaming cats as a source of human-caused avian mortality in the United States.

A wide range of species, from hummingbirds to raptors, are susceptible to these deadly collisions, but the losses are greater for some birds than others: Insect-eating and woodland-dwelling migratory birds are more likely to strike glassy buildings than other species, according to a recent study published in Conservation Biology.

Those findings grew out of earlier research that found high death tolls for birds colliding with large glassy buildings, especially those in less urbanized pockets of North America that tend to host more migratory birds. During the 2014 fall migration, the time of year when these strikes typically peak, the research team documented collisions at 281 buildings across 40 university campuses in the U.S., Canada, and Mexico. Between August and October, the researchers gathered 240 carcasses representing 40 species that they found within seven feet of the buildings.

While that work identified species like the Common Yellowthroat and Ruby-throated Hummingbird as frequent collision victims, the researchers couldn’t tell what made these birds more likely to crash and die versus others. “We wanted to understand what is it about different bird species and the shared commonalities among these species that makes them vulnerable to collisions,” says Scott Loss, an ecologist at Oklahoma State University.

To find out, Loss and the rest of the team behind the newer study compared how abundant and widespread a species is to how many individuals of that species they found dead. That process identified 10 bird species that were disproportionately vulnerable to collision fatalities: Black-throated Blue Warbler, Ovenbird, Ruby-throated Hummingbird, Yellow-bellied Sapsucker, Wood Thrush, Gray Catbird, Common Yellowthroat, Brown Thrasher, White-breasted Nuthatch, and American Goldfinch. The last three species in that list hadn’t been identified previously as high-risk for building strikes, the authors report.

Their analysis further supported previous research showing that migratory birds, many of which travel in large groups and at night, were more likely to fly into glass buildings than resident birds. “They get easily confused and attracted to light at night,” says Jared Elmore, a graduate student in Loss’s lab and lead author of the recent study. And among them, it was the forest-inhabiting and insect-eating migratory birds like warblers and flycatchers that took the biggest hit. These birds often fly at high speeds through small openings in the forest canopy hunting for bugs, a feeding method that may put them at greater risk of running into glassy surfaces that reflect vegetation. Potentially adding to that threat is the fact that the insects these birds eat are also drawn to artificial light around buildings, the authors write, but they also note that it might not be a major factor in collisions.

The researchers also found that larger buildings sporting vast expanses of glass were likely to kill more birds—perhaps not a surprising finding, but one that underscores a growing threat to avian populations. “We’re building structures at a faster rate than pretty much anytime in human history,” Elmore says. “Glass is seen as a really attractive and cheap building material. And that’s not good for the birds.” He suggests that such collisions may further fuel the decline in populations of species like the American Goldfinch, Brown Thrasher, Wood Thrush, and Common Yellowthroat that have already experienced steep drops since the 1970s. In total, North America has an estimated 3 billion birds fewer than it did half a century ago, and building strikes are considered one significant factor in those losses.

Todd Arnold, a conservation biologist at the University of Minnesota who wasn’t involved in the study, points out that its carcass surveys, while impressive in coverage, give us only a glimpse of the problem. The study did not include the big skyscrapers that are known to kill lots of birds, and the Pacific Flyway was underrepresented in its dataset, he says.

The good news is that some cities are already working to reduce such strikes. As of now, cities like New York, Toronto, San Francisco, and Oakland lead the way by requiring bird-safe building practices, which include adding patterns to glass to help break up reflective surfaces and turning off lights at night during peak migration. Congress, meanwhile, is considering the Bird-Safe Buildings Act, which would require bird-friendly measures when the federal government builds or renovates structures. Wider uptake of these building practices will make the world less dangerous for birds that need all the help they can get.